I was never a great Dr. Who fan as a child, but I did watch some of the episodes when it was revived some years ago with Christopher Eccleston as Dr. Who.

Maria was more of a fan, especially when David Tennant was in the lead role!! I’m not sure if it was the story-line she found attractive or David Tennant!

Anyway, the thought of time travel is a fascinating concept. The ability to move forwards or backwards in time is mind blowing. Last week we had the closest experience to time travel we are likely to ever get, when we had a week’s holiday in a cottage near to Keswick. For once it was a dry and sunny week and better still Matt and Miriam managed to come up from London for a few days. This was the first time we had seen them since September and we really enjoyed the week as Jenny was also ‘holding the fort’ at work.

The joy of Covid has meant that for most of us time has stood still for a year; holidays delayed, meals out with friends postponed and anniversary celebrations re-arranged. But last week in the Lakes and the last few weeks at work, I now finally feel we are getting back to normal.

As you can see from the photographs which I took on Northumberland Street – the first taken late in March before restrictions were lifted and the second on the same day at the same time but in mid-April – people are now definitely venturing back into town. 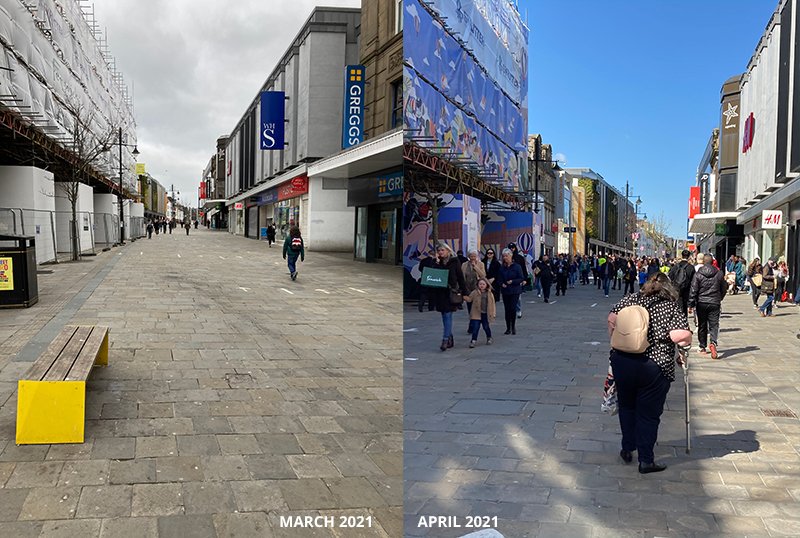 It is nowhere near as busy as normal, but we are getting there. As for the shops, those that have survived have reopened with good stock levels, Fenwick’s has spread some areas out more as have John Lewis. This helps with social distancing and obviously face masks/coverings are mandatory. I felt safe walking through Eldon Square as people are generally keeping their distance and following a one-way system where appropriate.

Just a few points you should be aware of; at present you cannot get from Eldon Gardens car park into Eldon Gardens shopping centre, the buses and Metro are quite quiet which is reassuring but it does mean more people are driving into town. This has put more of a strain on car parking and we have had several patients over the last month saying that they had real problems finding a parking spot.

So, if you have an appointment to see us, or perhaps the hairdresser, then allow yourself plenty of time.

Some shops have not re-opened, two spring to mind – the Pen Shop and the Hotter shoe shop but my credit card is not disappointed as Maria liked shopping there!

From our perspective we are very much looking forwards not backwards. Whilst we are still very aware of the danger of Covid; we continue to spread out appointments, are cleaning everything between each patient, we are using face masks at all times and are asking patients to pay by card if at all possible, the practice is getting back to normal.

We have managed to re-open our dispensing room upstairs as well as the Vision Therapy and Contact Lens consulting room on the second floor. We are now fully re-stocked and have several brand-new frame ranges. If fact I feel we now have the best choice of frames we have ever had in the last 30 years. 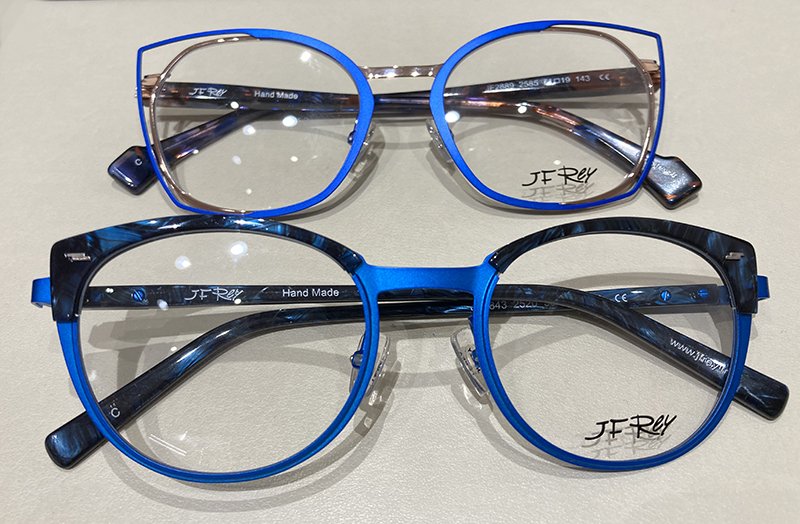 Talking of 30 years, Maria and I finally managed to have a celebratory meal out for our 30th Wedding Anniversary…it’s only been delayed by 6 months.

It was really lovely to have a meal in a restaurant again, the food was excellent and we felt very safe. You could see the relief on the owner and staff faces, that they were back open.

So hopefully now that more and more of us have had at least one vaccination, if not 2, we can all get back to normal.

Another sign of life getting back to normal is that I have entered a Triathlon!! Maria thinks I am mad and has accused me of having a mid-life crisis. This is the first Triathlon I will have done in 5 years, the event is in mid-July in Ashington and consists of a 1.5 Km open water swim, a 40 Km bike ride and a 10 Km run.

The weeks are flying by and the training is best described as patchy – I haven’t actually swum for about a year; the running is going OK and the cycling can only be called a work in progress. However, with the weather getting better I am starting to cycle more outdoors and will probably start cycling to work some days in the near future. This is something I’ve done in the past, when I was much younger and we lived in Gosforth.

I remember vividly cycling to work on Christmas Eve one year, not long after we bought the practice. As usual on Christmas Eve we finished at lunch time and Mary and Sean – both sadly no longer with us – suggested we had a quick drink at the pub before heading home. So, the 3 of us, plus Alison who was the receptionist at the time, headed to the pub and as often happens, one drink led to another and after a couple of hours, I thought it best to head for home.

I was very careful to avoid traffic by cycling across the Town Moor and must admit was delighted to reach home safely. As I cycled onto the drive, I saw Maria standing at the window with Matt who had just turned 3 and Jenny who was about 5 months old, waiving at Daddy. I was so pleased to see them that I waved back, very enthusiastically and cycled…… straight into the garage door! As I carefully picked myself up off the ground, I thought I would have a concerned wife worried that I might have broken something, instead what I saw was Maria laughing her head off – my pride was more bruised than my body!

So, if you come for an appointment in July and I can’t walk you will know I’ve ‘managed’ to do the triathlon – perhaps then I will accept I’m getting a little older.

The dispensing opticians have asked me to remind everyone that our birthday sun spec promotion is still on until the end of June. So, if you are going to manage a holiday this summer and need eye protection against the sun, now is the time to get new sun glasses.

Well, I am off to try and run 5 miles and hopefully I’ll be home before it goes dark so I’ll stop rambling for now. I hope you are well and that your life is getting back to normal, take care and I hope to see you soon.

We use cookies on our website to give you the most relevant experience by remembering your preferences and repeat visits. By clicking “Accept All”, you consent to the use of ALL the cookies. However, you may visit "Cookie Settings" to provide a controlled consent.
Cookie SettingsAccept All
Manage consent

This website uses cookies to improve your experience while you navigate through the website. Out of these, the cookies that are categorized as necessary are stored on your browser as they are essential for the working of basic functionalities of the website. We also use third-party cookies that help us analyze and understand how you use this website. These cookies will be stored in your browser only with your consent. You also have the option to opt-out of these cookies. But opting out of some of these cookies may affect your browsing experience.
Necessary Always Enabled
Necessary cookies are absolutely essential for the website to function properly. These cookies ensure basic functionalities and security features of the website, anonymously.
Functional
Functional cookies help to perform certain functionalities like sharing the content of the website on social media platforms, collect feedbacks, and other third-party features.
Performance
Performance cookies are used to understand and analyze the key performance indexes of the website which helps in delivering a better user experience for the visitors.
Analytics
Analytical cookies are used to understand how visitors interact with the website. These cookies help provide information on metrics the number of visitors, bounce rate, traffic source, etc.
Advertisement
Advertisement cookies are used to provide visitors with relevant ads and marketing campaigns. These cookies track visitors across websites and collect information to provide customized ads.
Others
Other uncategorized cookies are those that are being analyzed and have not been classified into a category as yet.
SAVE & ACCEPT